Summer String Week will enhance students’ musicianship and technical ability. The camp will include ensemble rehearsal with Maestro Jorge Orozco and our wonderful MCYO faculty. Musicians will also experience music history, theory, and composition through hands-on sessions. Students will also have performance and masterclass opportunities during camp week.

***Students will be required to bring their own bagged lunch, each day. No refrigeration will be provided.

All content will differ from prior camp sessions. Musicians from past summer camps are welcome back in Summer Strings Week!

Applicant Requirements:
SENIOR GROUP (students entering 6th – 8th grade)
· Participants must have taken private lessons for 4-5 years for Violins, 3-4 years for Viola & Cello, and 2 years for Bass.
· No separate audition is required for current MCYO musicians. Non-MCYO musicians will be asked to submit a video with their application. The video should include a solo piece of the student’s choice. It does not have to be a professional recording, a home recording is perfectly fine.

JUNIOR GROUP (students entering 3rd–6th grade)
· Participants must have taken private lessons for 2-3 years for violin and 2 years for viola, cello, and 1 year for bass.
· No audition is required, but musicians will be placed in ensembles according to their level.
· All musicians must be able to read music.

Questions? Feel free to email all your summer camp questions to MCYO@strathmore.org Violinist Jorge Orozco is a faculty member at the Levine School of Music and the Georgetown Visitation School. He is also conductor of Chamber Strings and Preparatory Strings at Maryland Classic Youth Orchestras. Under Mr. Orozco’s tutelage, Chamber Strings has performed at Strathmore, the Kennedy Center concert hall, and Carnegie Hall. Mr. Orozco is an active chamber music performer in the Washington Metropolitan area with pianist Carlos Rodriguez and with his wife, violist Maria Montano. He is also the concertmaster of the Masterworks Music Festival Orchestra during the summer and a member of the National Chamber Ensemble. Mr. Orozco is a former member of the Vox Amadeus Ensemble in Philadelphia, Mobile Symphony Orchestra and Opera, and former associate concertmaster of the Pensacola Symphony Orchestra. Mr. Orozco holds a Master’s Degree in Music Performance from the University of Southern Mississippi and a Bachelor Degree in music performance from the Instituto Superior de Artes, Havana, Cuba. Mr. Orozco has participated in numerous Festivals and workshops including the Texas Music Festival, Victoria Bach Festival, Havana Contemporary Music Festival, Vicksburg Chamber Music Festival, the Sterling-Delay Seminar, and the Juilliard Conducting Workshop. Seth Castleton is a winner of the Brigham Young University Concerto Competition and has soloed with the BYU Philharmonic. He has also been a finalist in the University of Maryland Concerto Competition. He performs regularly with groups in the Washington D.C. area, such as the Apollo Chamber Orchestra and Alexandria Symphony. Mr. Castleton’s cello playing has taken him to several summer music festivals, including the National Orchestral Institute, Chautauqua, and Kent/Blossom Music. He teaches cello both in his private studio and at the Levine School of Music. Mr. Castleton has recently enjoyed collaborating with the Maryland Classic Youth Orchestra (MCYO) as a cello section coach. Mr. Castleton is currently pursuing a Doctor of Musical Arts degree at the University of Maryland, College Park. He holds a M.M. in Cello Performance from the University of Maryland, and a B.M. in Cello Performance from Brigham Young University. He has studied cello with Evelyn Elsing, David Teie, Kenneth Slowik, Peter Wiley, Julie Bevan, and Stephen Geber. Apart from his love for music and the arts, Mr. Castleton enjoys spending time with his lovely wife, two-year-old son James, and newborn daughter Laura.

Hailing from North Carolina, Alice Ming-Yi Ju received her M.M. and B.M. in Violin Performance from the University of Maryland and M.A in Music Education from the University of North Carolina Chapel Hill. She has attended the Killington Music Festival, Musicorda, Brevard Music Center and National Orchestral Institute. Her primary teachers include Kevin Lawrence, David Salness, the late Dr. Richard Luby and Eric Prtichard.

Before moving to Cary, NC last August, Ms. Ju was the Director of Orchestras at Farmington High School and Power Middle School in Farmington, MI. Prior to the position in Michigan, she was on faculty at the prestigious Levine School of Music, an Orchestra Director in Fairfax County Public Schools, a Violin Sectional Coach for Maryland Classic Youth Orchestras- working with Artistic Director Jonathan Carney and Violin Instructor for Vienna Summer Strings while maintaining a private violin studio and freelancing in the Washington D.C. area. Currently, Ms. Ju is the Director of Orchestras at Green Hope High School in Cary, NC, a chamber music coach for the North Carolina Chamber Music Institute, sectional coach for the Triangle Youth Orchestra as well as a Board member of the Philharmonic Association.

Dr. Jennifer Lee maintains a diverse teaching and performing career with solo, chamber and orchestral engagements throughout the United States and abroad. As an orchestral musician, she has performed with the Portland and Baltimore Symphonies, and on international tours with Maestro Christoph Eschenbach and pianist Lang Lang. Recent collaborations include performances with the Dover Quartet at the Artosphere Festival, and with members of the Aeolus and Left Bank Quartets at the Smithsonian Chamber Music Society on the Stradivarius and Amati instruments of the Smithsonian Collection. Jennifer has recorded for the Naxos Label with the Post Classical Ensemble of Washington, D.C. and Hansler Classic of Germany with Rolf Beck.

Jennifer currently serves as the Professor of Violin at Montgomery College, sectional coach at Georgetown University, and has given residencies and master classes at the University of Arkansas and State University of New York at Geneseo. She has also taught at Brooklyn College and Ithaca College’s Summer Music Academy, and is a former teaching artist for the Midori and Friends Foundation in New York City. Born in St-Petersburg, Russia into a musical family, Vasily started playing the cello at the age of seven. His teachers included Natalia Gutman, Anatoly Nikitin, Walter Nothas, Daniil Shafran and Elisso Virsaladze (chamber music). Vasily was an associate principal cello with the Soloists of St. Petersburg chamber ensemble, the chamber orchestra founded by violinist Michael Gantwarg and cello section St.-Petersburg Philharmonic orchestra under Maestro Yuri Temirkanov in the nineties. He served on the cello faculty of the St. Petersburg Conservatory, Russia teaching cello and various classes helping the students to work on the orchestral excerpts. In 2000 he moved to Germany to complete his Artist Diploma in Munich Academy of Music. He performed chamber music frequently under Live Muisc Now and Villa Musica concert managements, maintained a small cello studio and played with the various chamber and symphony orchestras in Germany. Currently living in Washington DC, Mr. Popov serves on the cello and chamber music faculties of the Levine School of Music where he is also an associate chair of Chamber Music and is artistic director and conductor of the Levine Chamber Orchestras. Vasily’s passions are cello performance and teaching. He enjoys working with the young musicians and performs on stage with them frequently. Vasily’s cello and chamber students play in the youth, amateur and professional orchestras not only in the Washington DC area but also in Russia, Europe and Asia.

Vasily performs on a French cello made in 1870 presented to him by Stephen and Susan Low. Vasily also plays jazz, rock and contemporary music in on his Zeta electric cello. In the spare time Vasily enjoys working in his garden, composing music, reading, fixing the bowed string instruments as well as playing music and biking with his wife pianist Ralitza Patcheva and young sons violinist Yuri and cellist Vlad.

Talya Schenk, violist, is an active performer in the Washington, DC region. She earned a Doctor of Musical Arts from The Catholic University of America, a Master of Music from The Hartt School of the University of Hartford, and a Bachelor of Arts from the University of Maryland, Baltimore County. Her teachers include Kimberly Sparr, Maria Lambros, Rita Porfiris, and Karin Brown. She maintains a busy private studio of viola and violin students in Rockville, Maryland. Dr. Schenk has had a long history with MCYO: first as a student, and now as a viola coach. She is a Lecturer at Frostburg State University, teaching violin and viola. When Talya is not making or teaching music, she is adventuring with her dog Luna. 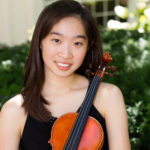 Described by The Baltimore Sun as “clearly gifted” and having “expressive talent,” violinist Evelyn Song is passionate about sharing her joy in music making. As an advocate for community outreach with a desire to bring the concert hall experience into the community, Evelyn enjoys giving interactive recitals at retirement homes. Also an enthusiastic teacher, she has spent many summers coaching young string students in her home studio as well as at music camps. For the 2021–2022 season, she was awarded both the Community Fellowship and the Musical Storytelling Fellowship of the Community Performances and Partnerships Program at New England Conservatory.

After her well-received performances of Mozart’s Violin Concerto No. 5 and Vivaldi’s Concerto for Two Violins with the Orchestra at Montgomery College, Music Director Pablo Saelzer invited Evelyn to serve as the artist-in-residence and concertmaster of the newly-formed ensemble UNSTRUNG. There she was tasked with recruiting musicians, nurturing young players, and assisting with concert logistics. She also had the honor of playing the Bruch Double Concerto for Violin and Viola with Jonathan Carney and the Baltimore Symphony Orchestra under the baton of Marin Alsop. As a versatile musician, Evelyn has made solo appearances at the Kennedy Center’s Millennium Stage, the National Gallery of Art, and the National Building Museum, as well as at unique venues including the Spanish Ambassador’s residence in Washington D.C. and Union Station’s Ann Taylor for its grand opening. Evelyn is a devoted chamber musician and seasoned orchestral player. During her seven-year tenure with the Maryland Classic Youth Orchestras (MCYO), she led MCYO string quartets to the Fischoff National Chamber Music Competition and the final round of the Saint Paul String Quartet Competition. She returned to MCYO as a soloist in the spring of 2022 to perform Vivaldi’s Concerto for Four Violins in B minor. She has played in master classes with such distinguished artists as Nikolaj Znaider, Rachel Barton Pine, Stefan Jackiw, Jeffrey Thayer, and the Ehnes, Danish, and Fine Arts Quartets. In the summer of 2019, she had the opportunity to work closely with the American String Quartet at the Centrum Chamber Music Workshop. Notable summer festivals attended include Kneisel Hall Chamber Music School and Festival and the Heifetz International Music Institute.

Evelyn earned her bachelor’s and master’s degrees at the Cleveland Institute of Music, where she studied with Ilya Kaler and Ivan Zenaty, and is currently working on a graduate diploma at New England Conservatory as a student of Ayano Ninomiya.