Senior Flute Choir, directed by: Janese Sampson. Janese Sampson enjoys a multi-faceted career as a recitalist, chamber musician, flute soloist, adjudicator, private instructor and educator. Currently she is the Applied Flute Professor at Bowie State University, teaches Instrumental Music in Montgomery County Public Schools, and coaches the Woodwind section of MCYO Young Artists Orchestra. Her flute solo and chamber music performances have been heard throughout the Washington area at venues such as the Corcoran Gallery of Art, The Barns at Wolf Trap, 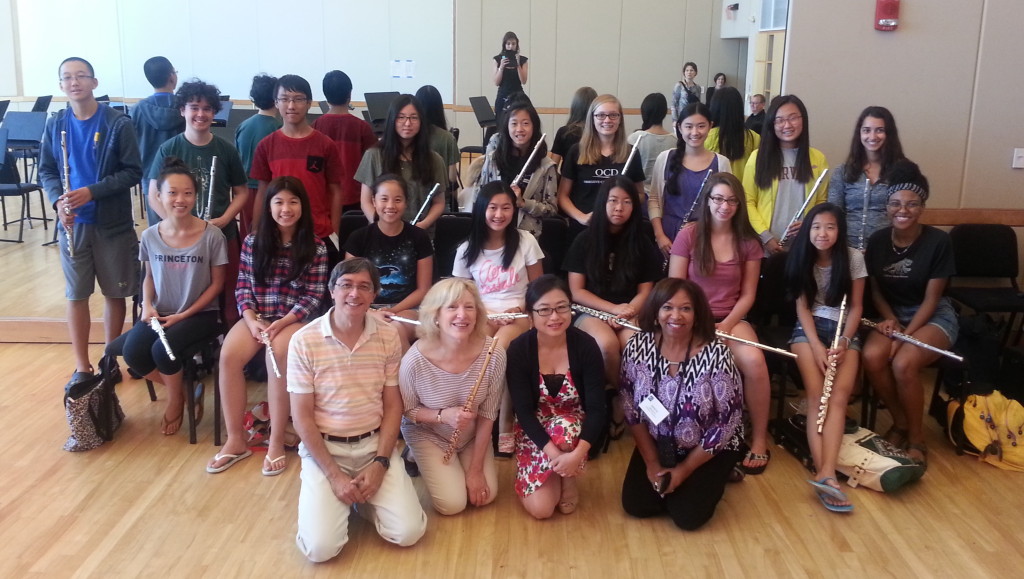 the Phillips Collection, the National Building Museum, the Smithsonian Institution, and the John F. Kennedy Center for the Performing Arts. As a freelance artist, Ms. Sampson has performed with such renowned performers as Aretha Franklin, Patti Austin, the late Ray Charles, Kathleen Battle, The Harlem Boys Choir, and the Washington Saxophone Quartet.

Junior Flute Choir, directed by: Carolyn Oh. She received her flute performance degrees from the Peabody Institute of Johns Hopkins University (BM), Indiana University (MM) and the Catholic University of America (DMA).  Her principal teachers include Vanita Hall Jones, Thomas Robertello and Jacques Zoon, with additional training with Julius Baker, former principal flutist of the New York Philharmonic. She has also interned in the Performance Plus program of The John F. Kennedy Center for the Performing Arts. As soloist, she has toured the U.S., England and South Africa with the New England Symphonic Ensemble.  She has also appeared as soloist with the Washington Symphony Orchestra, Montgomery College Orchestra and the Southeastern Music Center Orchestra.  As an orchestral musician, she has played principal flute at Carnegie Hall under the baton of John Rutter, as well as with the Washington Summer Opera Orchestra and the Washington Korean Symphony Orchestra, among others. She has also performed with the Chamber Orchestra of America and the Fairfax Symphony Orchestra.